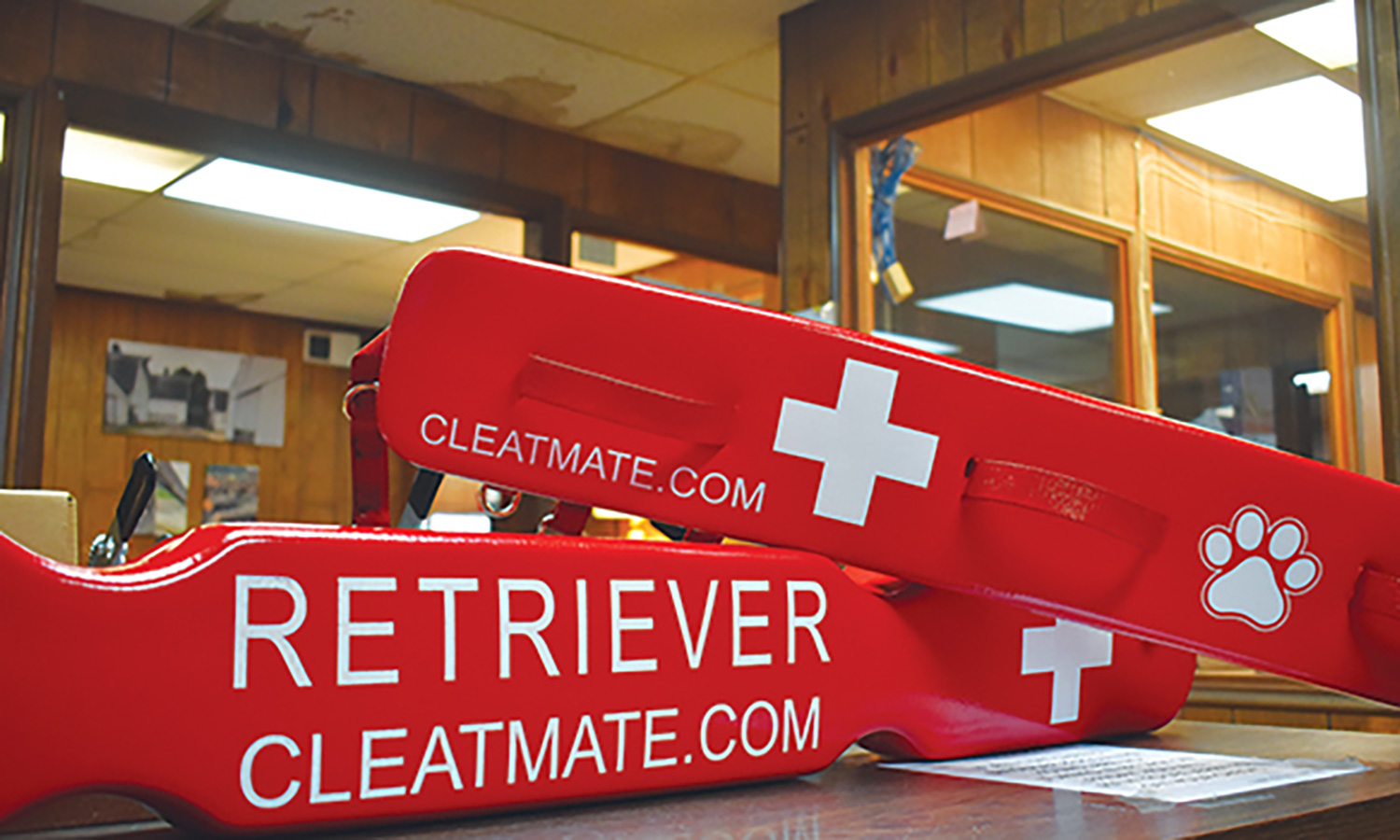 Now, he has developed a product in hopes of preventing such an event from occurring.

Hinz, owner of Hinz Landscaping/Snow Busters in Buchanan and South Bend, created the Cleat-Mate and accompanying accessories. The ratchet system is meant to allow someone of any strength to reel in a person in distress or heavy objects in minutes. Its accompanying products are meant to make the Cleat-Mate adaptable for a plethora of environments and uses.

The device is named after and works like a cleat, a handlebar-shaped metal object extending from boats. Flotation devices are tied to it with ropes. They can be thrown out and reeled in with while the cleat keeps the ropes secure.

The Cleat-Mate acts as a cleat but can be attached to a variety of surfaces with the help of rings, straps and pins. Rather than pulling the attached rope, a person can lift and press a handle that activates its ratcheting system, which pulls its flotation device in.

The invention is meant to take the strength, balance and leverage needed to pull in something attached to a cleat unnecessary.

Strength and leverage was something Hinz lacked when he watched a man slip into Lake Michigan unconscious last year, said Shelley Churchill. Hinz’s right-hand woman told his story while he was out on an assignment, walking through an open space filled with dozens of flotation devices at Hinz Landscaping/Snow Busters in South Bend.

Hinz was unable to pull up the unconscious man on his own, and even with two men helping him, they could not lift the man up the marina stairs, Churchill said. If the man had not regained consciousness, he could have died.

“It really bothered Jerry that somebody could have drowned right in front of his face,” Churchill said. “He went home, laid down and went to sleep, and he explains it just like this: God came down and told me, ‘You’ve got to do something.’”

Early next morning, Hinz drove to Rural King and purchased the parts that would later become the Cleat-Mate prototype. He passed along the prototype to a mechanic friend in Elkhart, and the Cleat-Mate was created.

In the three months since the drowning incident, the Cleat-Mate has become patent pending, its flotation devices have become Coast Guard-approved and a variety of other accessories have been developed to make the Cleat-Mate versatile.

Now, there are attachments that allow the Cleat-Mate to connect to the ends of pick-up trucks and swimming pool walls; be wrapped around objects such as trees; and attached to objects that can be driven into ice for winter rescues.

Other accessories allow the Cleat-Mate to be used for recreational purposes. One keeps flags in place on boats, while another can pull tables to the end of a boat for extra eating space.

Its primary purpose, however, is to save people.

“We believe there should be one on every rescue vehicle out there,” Churchill said. “Every police officer should have one. It can be used for so many things, it just might be handy to have in their car whether they’re trying to rescue someone from the water or not.”

Marketing is the next step for the business. Its website, cleatmate.com, has launched. Churchill is making calls to hotels, schools, first responder departments and pet stores to let them know of the product.

The Cleat-Mate is available for individuals as well, Churchill said.