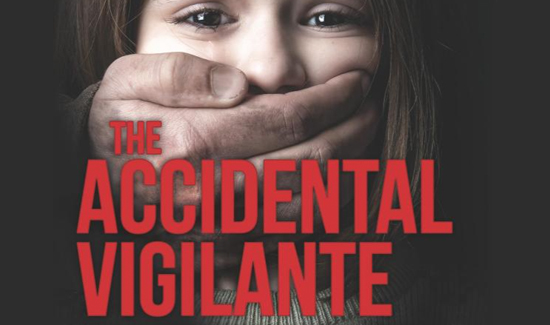 Robert Sterling Hecker, police chief for the Harbor Police Department-Port of New Orleans, intends to keep his day job (for now) even as he embarks on a new career as crime fiction author. After decades of fighting criminals in the Big Easy, Hecker has penned a thrilling new crime fiction novel called The Accidental Vigilante.

Now available in paperback and digital editions, The Accidental Vigilante features a rookie New Orleans cop, Jeremy Porter, who is labeled an oddball by his peers. Porter’s abrupt transfer to the Child Abuse Section is quickly terminated after he botches his first interrogation. He is ridiculed, ostracized and demoted to desk duty. Determined to prove himself, he decides to secretly conduct his own off-duty surveillance of dangerous child molesters. However, his good intentions result in several homicides and Porter becomes a person of interest to the NOPD.

That’s only the beginning of his troubles. Once the leader of a vicious Russian crime syndicate learns the rogue cop is threatening his criminal enterprise, he orders the abduction of two more children, including Porter’s six-year old daughter. Since Porter is the subject of a citywide manhunt by his own department, he must act alone. Will he be able to evade his own arrest to save her?

“I’ve witnessed so many brazen and outrageous criminal acts during my nearly 50 years in law enforcement. Now, I have a burning desire to channel those vivid memories and vast experience into crime fiction/mystery/thriller novels. I have so many different stories swirling around in my head, I am eager to continue my newfound passion of writing,” Hecker says.

Hecker is also known for his accomplishments during the Hurricane Katrina disaster in 2005. For his leadership, he was named New Orleanian of the Year by Gambit Magazine, Hero of the Storm by WDSU Television Station and Southern Woman Magazine, Metropolitan Crime Commission’s Meritorious Service Award and was the recipient of the Supervisor of the Year Award from Victims and Citizens Against Crime. Many other honors soon followed.

The Accidental Vigilante gestated for many years before Hecker made time to finish it in 2016. When word of his publishing ambitions became public he was invited to join the “Cops and Authors” writers conference last September at the East Bank Regional Library in Metairie.

Now that his first novel is complete and available on Amazon, (print and Kindle), Hecker is considering other projects. More crime fiction will follow, but nonfiction and a foray into television and film are also possibilities.

“The Accidental Vigilante is the start of a plan to be productive as a writer in various ways. So many new things are happening in publishing and the world of entertainment that it seems wise to keep my options open,” he says.

Hecker was appointed chief of the Harbor Police Department in 1995 and continues to command a uniformed patrol force, marine division, police academy, detective division that interacts with the FBI Joint Terrorism Task Force, and the BEST Task Force. Hecker also manages the port’s emergency response vessel, the Gen. Roy S. Kelley, and the firefighters who staff the vessel.