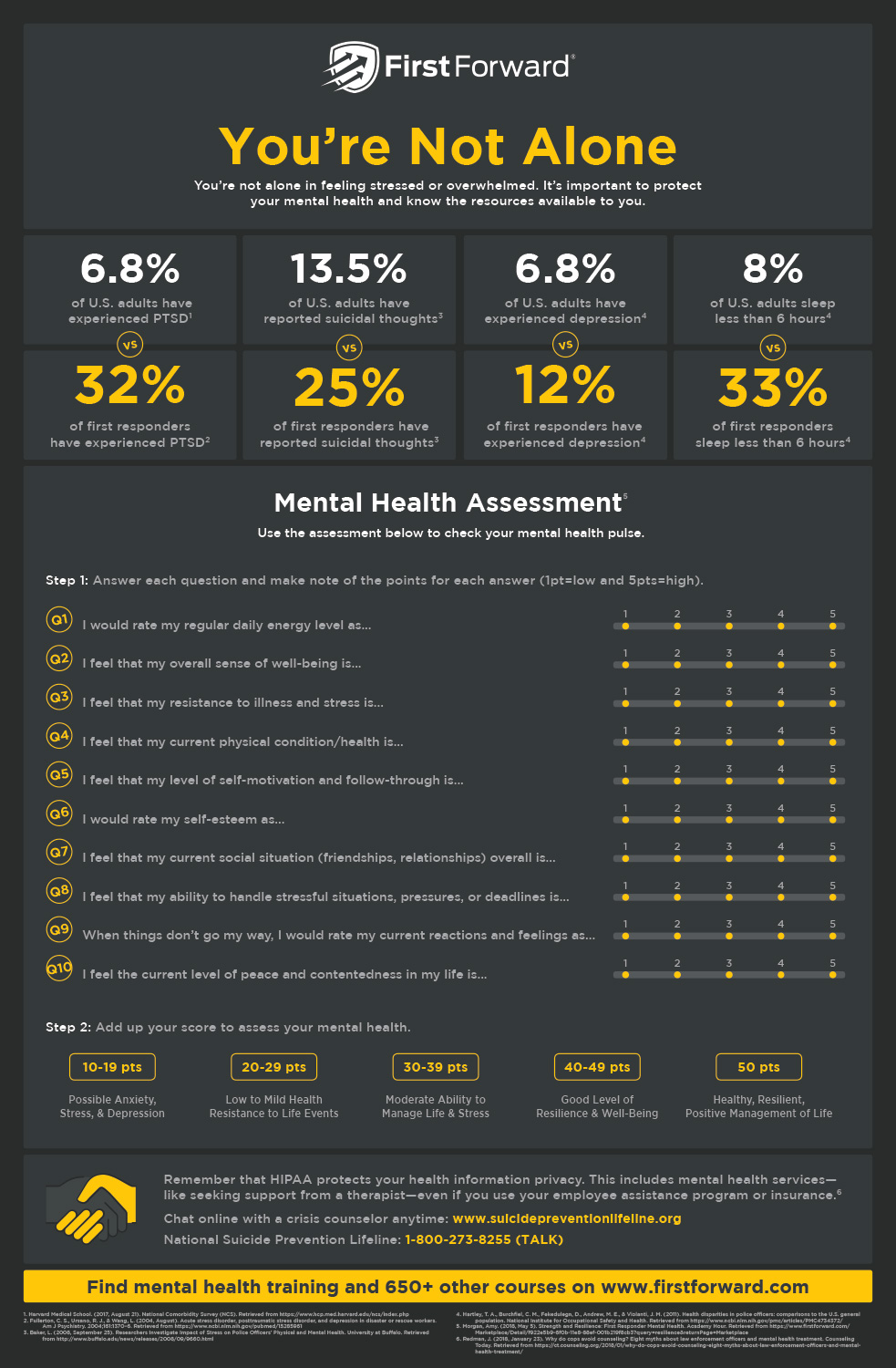 Because their roles exist largely to render aid in the worst moments of citizens’ lives, a police officer, firefighter, or emergency medical professional can be exposed at any instant to things the average person could go a lifetime without seeing. It is an immensely stressful aspect of the job, capable of sending even the mentally strongest worker into a spiral of mental turmoil, requiring individuals to devise coping strategies and their employers to implement programs that account for the traumatic exposure. Without these protections in place, these personnel can face devastating outcomes: shattered relationships, mental illness, and even suicide.

Of course, most responders understand there is a high possibility of witnessing horrifying scenes well before they enter the field. Even then, knowing and experiencing can be two very different things. Officers who volunteer to scan seized devices image-by-image for the presence of child pornography, for instance, may find it hard to conceptualize what they are about to experience. In these situations, “no questions asked” walkout rules and provisions mandating that volunteers undergo mental health screening at greater intervals may be seen as minimum protections. In other instances, a single, particularly gruesome accident or murder scene may be all it takes to inflict added burden on public safety personnel, searing images into their brains unlike any that most people will ever experience.

The stress these situations create, combined with the very real pressure of working a job in which one’s life is routinely in danger, can lead to an environment rife with opportunity for improved handling of mental health issues. For employing agencies, the challenge is clear: finding a combination of solutions that provide effective help to suffering responders, while meeting the strict budget and scheduling parameters of any public sector job.

The problem at the core of many cases is widespread enough to touch personnel across the breadth of response, corrections, and criminal justice services. Vicarious traumatization is described in one above resource as an affliction “that turns empathy for a victim into a form of suffering.”

Symptoms related to vicarious traumatization are sadly well known to many first responders and their families. Under a collection of headers including “Physical,” “Intellectual/Cognitive,” “Behavioral,” and “Spiritual,” a list compiled by responder-focused mental health foundation SHIFT Wellness spells out numerous potential outcomes of the illness [PDF link], including (but not limited to):

Per SHIFT, occasional occurrences of these and other symptoms on the list are normal, if not expected, in a field so stressful. They become a warning sign, the agency says, as they increasingly persist and intrude into one’s life; likewise, they become full-blown “trouble indicators” when they cross the line into full persistence and intrusion.

As noted, there is a reason these symptoms are often discussed in the context of first response. Regardless of legal obligations to treat mental health issues related to traumatic exposure, there is no question the jobs of responders and corrections professionals come with greater risks than the average job. Few, if any, accountants encounter dead or grievously wounded victims as a matter of course, just as most janitors do not worry whether they will be coming home to their family at the end of a shift.

Moreover, the inherent problem swings the other direction. An officer or firefighter under extreme, unspoken mental duress is far less likely to perform optimally in the field. Given the proven link between disengagement with one’s job and high levels of workplace stress, this circles back to create a condition that puts the afflicted employee’s colleagues and the public at large — as well as their employer’s reputation — at continual, escalating risk.

Who is responsible for workplace-induced trauma?

In terms of liability, discussions of a workplace’s responsibility to pay attention to mental health on the job have increasingly sided with employees since at least 1990, when the landmark Americans with Disabilities Act (ADA) put forth extensive protections for potential and current employees suffering some form of “psychiatric disability.” By the act’s definition, any condition that “substantially limits one or more major life activities” falls beneath this banner. In this regard, the ADA makes little distinction between physical and mental illness, allowing employers to discriminate against potential employees only when their condition would preclude them from performing the job’s basic functions.

The story is much the same for employees suffering mental health problems because of their duties. Per the Harvard Business Review (HBR), many state workers’ compensation laws account for repetitive stress of the mental or physical variety, insofar as they may affect an employee’s ability to function on the job. California code, for instance, “allows compensation for injuries caused by ‘repetitive mentally or physically traumatic activities extending over a period of time, the combined effect of which causes any disability or need for medical treatment.’” Alongside the growing knowledge that workplace stress and trauma contribute to numerous physical and mental ailments (such as depression and heart disease) and the basic fact that well over half of employees find their workplaces stressful (62% in one study reported by HBR), this creates a potential minefield for even well-intentioned employers in workplaces with intense stress and trauma.

The concern grows even more serious in fields that value a certain attitude — often discussed in terms of “toughness”— in the face of mental health disorders. In law enforcement, for instance, mental health issues are still widely stigmatized, with afflicted employees fearing being ostracized or facing retribution for self-reporting. This culture persists despite major efforts by organizations like the International Association of Chiefs of Police to address and remove the stigma surrounding certain ailments.

From the financial stress of workers’ compensation claims to basic moral responsibility, there is no end to the list of reasons an agency may wish to get a handle on problems like vicarious trauma. This may seem particularly challenging in a field where — again — exposure to horrific imagery and extreme pressure are commonplace, and outliers are always a sad possibility. However, this is not to say the problem is wholly unmanageable. The first and best thing a department can do is make resources available and support those who seek them out. In a law enforcement context, meeting this goal means making two sorts of services available: peer support groups (PSGs) – widely used in situations where officers are directly involved in a traumatic incident – and full police psychology services.

Naturally, each manner of service has its benefits and its drawbacks. With PSGs, officers who elect to seek help receive support from people who have walked the same professional path, and often suffered the same sorts of traumatic incidents. This lends an immediate air of credibility to the service and potentially provides an attractive avenue to officers who would otherwise be reticent to seek help. These services are best codified into department policy and made available when the afflicted officer is known to have been involved in a highly traumatic incident. A department, for instance, may mandate a single meeting with a designated peer support officer following a justified use-of-force incident. At minimum, this allows the peer support team to get a feel for the officer’s mental state immediately following the trauma and brings officers who may claim to feel “fine” — while truly feeling anything but under the surface — in front of support.

Psychology services, meanwhile, offer a service that is far less common than the average PSG — analysis by Dr. Ellen Kirschman, known as “Cop Doc,” suggests there are several hundred practitioners of police psychology nationwide, compared to the huge number of formal/informal support groups — but even more valuable in the right contexts. Just as a traditional talk therapist and psychologist cover different ground via different clinical services, a PSG and police psychologist are ultimately there with two different goals in mind. One supports officers and gives them a place to talk during problematic times in their careers, while the other provides assessment, therapy, or consulting, among other services, depending on licensure and the scope of service the department ultimately desires. A department may hire one psychologist to craft policy and job listings, for instance, then use the expertise to hire another who serves officers.

In either event, the department that wishes for its program to make any sort of headway must respect confidentiality to the fullest extent possible. Making assurances to this end is more difficult with PSGs than psychologists, whose clients, regardless of profession, are generally protected by patient-practitioner confidentiality laws, barring certain exceptions such as the imminent risk of harm to oneself or others. PSGs, meanwhile, are subject to a spectrum of potential confidentiality snags, based on departmental policy and the laws of the state the agency ultimately serves. While certain jurisdictions such as Denver do boast laws that protect information divulged in PSGs, for example, others have no such law, meaning a PSG leader or administrator could be compelled to testify or hand over information in a case directly involving the officer.

Finally, it should be noted that most information shared here, where geared towards law enforcement, has applications in other response/corrections fields. Fire and corrections organizations, for instance, have increasingly made various psychological services available to employees in recent years.

Conclusion: Mental health is a hard, but necessary, hill to climb

Any stakeholder who has dealt with mental health issues among personnel knows just how challenging it can be. Performance issues such as call-ins, combined with the potential for combustive controversy and real human concern for one’s employees, make for a heavy mix.

Recent history shows all the reasons it is also an issue that requires attention, and the sooner the better. Between risk to one’s department, its finances, its reputation, the public, and personnel themselves, one incident is all it takes to cause trouble. Those organizations unable to fund such services are encouraged to reach out for the ample grant relief available to responder mental health initiatives.

With mental health issues affecting nearly 20 percent of adults, many of whom do not suffer exposure to traumatic incidents, it is a fair assumption that at least one officer in every department struggles more than they let on.