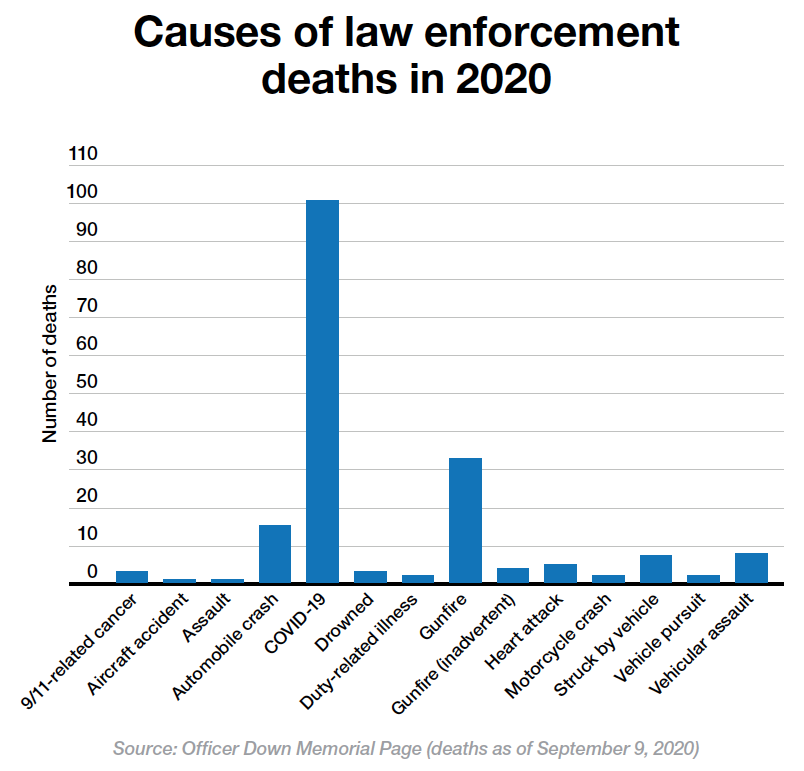 In a recent speech in Pittsburgh, presidential candidate Joe Biden made a claim that raised some eyebrows: “More cops have died from COVID this year than have been killed on patrol.” As it turns out, this claim is essentially true.

According to data gathered by the Officer Down Memorial Page (ODMP) and the National Law Enforcement Officers Memorial Fund (NLEOMF), which are both nonprofit organizations that have tracked law enforcement deaths for decades, on-the-job coronavirus infections have been responsible for more than 100 officer deaths this year. That’s more than gun violence, car accidents and all other causes combined, the two groups found.

The Poynter Institute’s PolitiFact points out that Biden’s specific claim is not 100% verifiable because “there is some statistical fuzziness regarding who is a cop and what it means to be on patrol.” However, they also agree that Biden’s statement is mostly true. In fact, officer deaths from non-COVID causes are down compared to 2019.

Both ODMP and the NLEOMF only count deaths from COVID “if it is determined that the officer died as a result of exposure to the virus while performing official duties,” as the NLEOMF put it. “Substantive evidence will be required to show the death was more than likely due to the direct and proximate result of a duty-related incident.”

In addition to the already-confirmed fatalities due to COVID, ODMP executive director Chris Cosgriff told The Washington Post that they are in the process of verifying an additional 150 officer deaths due to COVID-19 and presumed to have been contracted in the line of duty.

“By the end of this pandemic, it is very likely that COVID will surpass 9/11 as the single largest incident cause of death for law enforcement officers,” he said.

The terrorist attacks on the World Trade Center killed 71 officers, one officer died on United Flight 93 and more than 300 have since died because of cancer contracted in the wake of the attacks, according to ODMP.

Both nonprofits have also compiled data on COVID-related deaths at the state level, and Texas stands out as particularly concerning. It has seen at least 21 law enforcement officers killed by the virus, by far the most of any state, according to NLEOMF. Louisiana is second with 12 deaths, while Florida, New Jersey and Illinois are next with eight deaths apiece.

The situation in Texas has led to a strong push by the Combined Law Enforcement Agencies of Texas (CLEAT) to make COVID a presumed condition for workers’ compensation for first responders. This would allow any police officer, jail officer, firefighter or medic who contracts the virus to automatically qualify for coverage for time away from work and health-
care costs.

“We’re very surprised, considering the number of executive orders that have been issued by the governor,” Jennifer Szimanski, the public affairs coordinator for CLEAT, told CBS 19. “This just seems like a no-brainer. If we’re going to mandate that they go to work, which, obviously, that’s going to happen — they’re gonna show up for work, they’re sworn to do so — then they should be taken care of.”

Texas is not the only state to push for workers’ compensation recognition related to COVID. In fact, 15 states have already recognized COVID as a presumed condition, while another 15 states have tried. And President Donald Trump did sign the Safeguarding America’s First Responders Act of 2020, which guarantees federal benefits for law enforcement officers and their survivors if the officer is killed or disabled by COVID. However, officers want more assistance and protection before the worst-case scenario occurs.

The situation in Texas is also significant because at least 16 of the state’s law enforcement deaths have been officers with the Texas Department of Criminal Justice, which manages the state’s correctional facilities. That has been a trend nationwide. Both nonprofits have discovered that officers in correctional facilities account for a large number of COVID-related law enforcement deaths, which is evidence of the dire epidemiological situation in America’s prisons and jails.

According to the Marshall Project, a nonprofit criminal justice news site, more than 100,000 U.S. prison inmates have tested positive for the coronavirus and at least 928 have died. There have been another 24,000 cases and 72 deaths among prison staff.

As seen in the October 2020 issue of American Police Beat magazine.
Don’t miss out on another issue today! Click below: