During the fundamentals portion of every pistol training course, I shout, “We are now going to do what’s called a ‘reset in recoil’ drill.” As I say that, I start scanning the firing line looking for facial expressions or head nods that make it clear to me the officers understand exactly what I am asking them to do. But that is not what I see. Rather, I get a polite look that says, “Don’t know what you’re talking about, but tell me more.”

I think one of the reasons for the unfamiliarity is the phrase “reset in recoil.” I do not hear that phrase used regularly in law enforcement training circles. What I do hear is “trigger reset” or “sear reset.” I think those phrases are more commonplace. But I believe the main reason for unfamiliarity is because “reset in recoil” is not a trigger technique that is normally taught to officers. This technique has little to do with a slow and smooth trigger press (like the typical trigger reset drill that most officers have been trained to do). In fact, it is just the opposite. It is a faster and more dynamic technique that is designed to work in unison with your weapon’s recoil and your natural trigger tendencies under stress. Basically, it is a quick reset of the trigger while the pistol is in recoil.

Say you are at the seven-yard line and just fired two to three stress-fire rounds in rapid succession (e.g., quick double or triple taps). You would notice that your rounds are not hitting the same hole on each double or triple tap. Rather, there is going to be a distinctive shot pattern or spread on the target. That is because it is virtually impossible for you to keep your weapon from moving during the recoil process. Sometimes the spread can be wide, and it may feel like you do not have full control of the pistol. Even if you are a USPSA or IPSC grandmaster, there will still be a spread. A much smaller spread, but a spread, nonetheless. And when referencing accountability for cops during a gunfight, a wide shot pattern can result in unintended targets being hit. To put it simply, we need to keep our shot groups within a defined and localized area, especially under stress.

In 2003, Tom Aveni from the Police Policy Studies Council published a report that included single officer-involved shootings (OIS) in Los Angeles County. He discovered that the officers averaged 3.59 rounds fired with a hit ratio of 51% (“Officer-Involved Shootings: What We Didn’t Know Has Hurt Us,” pg. 9). Since then, a 15-year study of single officer OISs was completed in 2018. The study was featured in Force Science Institute newsletter #378. The more recent study indicates that our hit ratios have deteriorated to 35%. That is more than six out of 10 rounds missing the target (Daigle Law Group).

If we are shooting an average of three to four rounds in a solo gunfight with hit ratios between 35–51%, then some of our range training needs to focus on consistent stress-fire hits within tightly defined impact areas. Thankfully, this “reset in recoil” drill moves us in the right direction with some stress-fire double-tap training.

The first thing I want you to do is to conduct a quick shooting assessment on the range. Visit pistol-training.com/drills/dot-torture and print the 8.5” x 11” Dot Torture target from the website. You will need at least two of these targets for the drill. Next, follow the directions for the “reset in recoil” drill.

Take one of the printed targets, put it up and stand at the three-yard line. Using the circles on the target, fire two rapid succession rounds into each numbered 1.75” circle (quick double taps). Also, make sure you are resetting your shooting platform and grip after each circle. At first glance, some cops may be intimidated by this drill. But after a little practice, it becomes very doable.

In order to conduct this drill correctly, you must make sure that you are not “riding” the trigger as it returns to reset after your first press. Do not listen for a click either. I want you to just quickly press the trigger twice each time. Some of you may have to mentally override previously engrained training if you are accustomed to using a slow and smooth “trigger reset” or “sear reset.” Remember, during a true stress-fire situation, it is unlikely you will slowly ride the trigger back to reset before firing the next round. You can test this theory by conducting a Simmunitions® or other force-on-force training. You will notice that under stress against an actual attacker, your finger does not slowly ride the trigger back to reset but presses it in rapid succession. Those dynamic presses are what we are trying to replicate.

Maximizing the “Reset in Recoil” Technique 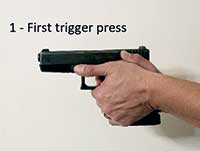 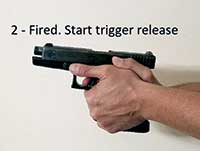 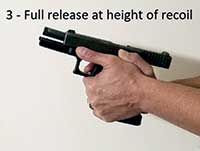 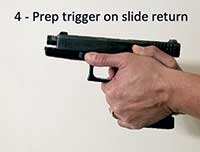 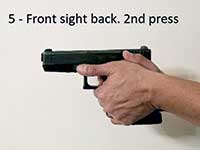 After you have fired all 20 rounds, you should be noticing consistency with all your first hits. Most will probably be on the money within the circles. If there is no consistency on the first hits, then you either have a front sight alignment issue or an anticipation issue. But do not worry about that for now. We will work on those issues in a future training article.

Another thing I want you to notice is the placement of all your second hits. They will either be above or below your first hit and may be to the left or right as well. The “reset in recoil” drill will only be dealing with the “y” axis (up and down) for now. We will discuss the “x” axis (left and right) in my next article.

Our goal in “reset in recoil” is to break the trigger for the first round, release it, then get back on it again while the gun is in recoil. Then, as the slide returns and you see the front sight come back on target, that is when you break the trigger again for the double-tap. If done correctly, your groupings will automatically tighten up on the “y” axis resulting in consistent localized hits.

Now, conduct the drill a second time using a fresh Dot Torture target. But slow the process down by concentrating on the trigger presses. You should be able to note some specific things during your resets. First, you should note how much “slack” your trigger has until it reaches the trigger “wall” (the distance between the initial resting point until the point of resistance). Second, you should note how much pressure you need to actually “break” the trigger. Every gun is different, so this awareness will help you learn your gun and its workings.

Additionally, look at the front sight. Watch it go up and down twice during each double-tap. Start out by getting the first hit, then, when you see the front sight come back into your visual plane (and in the circle again), press the trigger a second time. This can be done as slow as needed in the beginning so you can get the feel of how to work the trigger. This whole concert of movement should eventually come together into one seemingly fluid motion. The “reset in recoil” drill being done at slow to medium speed can be found here: youtu.be/7kLssJ0yo_0. You will be able to see the double taps hitting the target, which should give you an idea of the feel and timing of the drill.

Once your double taps begin to stay within the circles on a consistent basis, then speed up your trigger press. Note, the faster your trigger press, the more stable your pistol must be. So, tighten that grip and really watch that front sight as you start to shoot faster. Keep doing the drill until your groupings on the “Y” axis consistently stay within 1.75” of each other. And once you feel competent shooting the drill, you can increase the round count and/or distance to add even more difficulty. Then you will be on your way to working with your gun, not against it.

If you have any questions, please get in touch. Otherwise, #staysafe and #stayready. 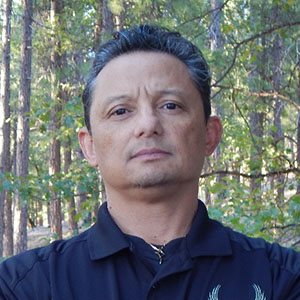