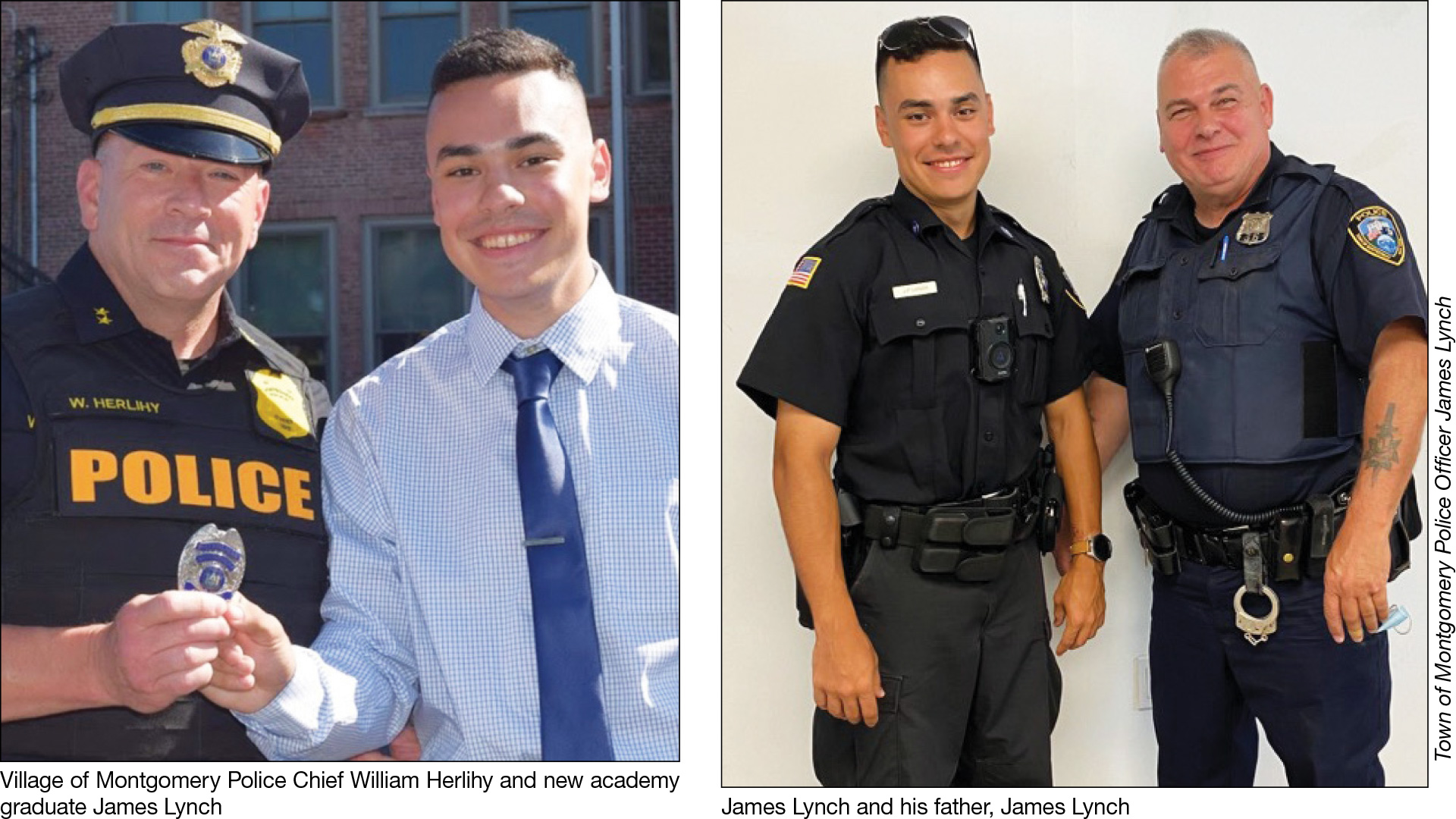 Of course, James Lynch was proud when his son, also named James, graduated from the police academy last summer. After all, as long as this dad could remember, young James had always wanted to be a cop.

But seeing him mark that accomplishment was made even more meaningful when son James joined the Village of Montgomery Police Department, just as his father had more than 20 years ago. Now, as a part-time officer with the surrounding Town of Montgomery, the older Officer Lynch feels pride swell every time he observes the younger Officer Lynch on a call.

“It’s pretty prideful to roll up and see your son on duty,” Lynch tells APB.

Located in Orange County, New York, the Town of Montgomery contains several villages, including Montgomery and Walden. Although each village has its own police department, the town’s police force often assists where needed, so it’s not all that unusual for the Lynches to encounter each other during a shift. What is unusual, at least compared with other police agencies, is that they are one of three current local father–son police duos: Andre Aresten Sr. and Andre Aresten Jr. serve the Town of Montgomery, and Brian and Tyler Briere police the Village of Montgomery.

“Sons often hold their dads up as heroes, and I think that’s true for law enforcement families more so, because officers are heroes, in my book, for what they do day in and day out. So it comes as no surprise to me that so many multiple generations in law enforcement are found in this community,” Village of Montgomery Police Chief William Herlihy tells APB. “When [the elder Officer Lynch’s] son, James Lynch, was looking for a part-time police officer job, I gladly offered him the opportunity to work with the Village of Montgomery Police Department. Knowing his father’s work ethic, I did not hesitate to give this exceptional young man a chance to carry on the ‘family business’ of service to their community.”

In fact, the chief has experienced this phenomenon himself, when he and his stepfather, a U.S. Marine Corps veteran and former corrections officer, entered the same academy class in 1993. They then joined the Village of Walden Police Department together.

“My stepfather instilled a sense of duty and service in me as I was growing up,” Herlihy says. “That was my influence in deciding to go into law enforcement.”

“It’s a calling, and these kids are following their fathers. Also, not only are my partners excellent police officers, but they’re also excellent fathers,” the elder Lynch says. “I see these kids as centurions; they’re the new breed of law enforcement. They are who we really need in policing.”

While the Lynches now share a professional bond, September 11, 2001, forged a forever bond between father and son. Even as a 3-year-old, young James liked working with his dad, and on that day, he accompanied his father to the boiler business Lynch owned, located 10 blocks away from the World Trade Center. After the first plane hit, Lynch was called in, but had to tell his captain he couldn’t report because his son was with him that day.

“My son saved my life because I couldn’t go in. Also, he told me the building was going to fall down. I told him, ‘Jimmy, you’re 3 and a half and you don’t know anything; the building isn’t coming down.’ Then we saw the second plane hit. We got in the car and left,” he recalls. “Everyone from the fire station next door went to the towers and everyone died. They all went and never came back. If it wasn’t for my son, I wouldn’t be here. He saved my life that day.”

As the 20th anniversary of that fateful day approaches this year, the Lynches plan to honor it with their own personal tradition.

“It’s always a quiet day for us,” the elder Lynch says.

As seen in the May 2021 issue of American Police Beat magazine.
Don’t miss out on another issue today! Click below: