Ninety-nine percent of sheriffs, chiefs and command staff either trust polygraphs too much, or not enough. But you’re about to learn everything you need to know, and if you put it all in play, you’ll measurably increase your agency’s performance. You’ll also avoid some very costly mistakes.

First of all, if you’re not using polygraphy, you’re making a big mistake. For both criminal testing and pre-employment testing, polygraphy is an incredibly valuable tool. As a collateral assignment, I was my agency’s polygraphist for years. I threw myself into it and developed professional relationships with some of the nation’s top authorities. Like an ace WWII fighter plane, my polygraph instrument was covered with wins — in this case, valuable confessions that resulted in both prison sentences and disqualifications of undeserving applicants who would have otherwise gotten the job.

By the way, I also think you’re making a mistake if you’re using computerized voice stress analysis (CVSA). There’s no time to get into that now, but do your own research (you can start by searching “NIJ CVSA” and “ABC CVSA” on Google).

Polygraphy has been around since the 1920s. It measures autonomic (uncontrollable), sympathetic (i.e., reactive) nervous system responses to psychological stimuli — in this case, the questions being asked. Three physiological “parameters” are used: heart rate, breathing and skin conductivity. Some polygraphists also use a plethysmograph to measure blood volume changes.

The psycho-physiology behind all this is voluminous and valid. But essentially, because we naturally want to survive, when we perceive a threat, our bodies go into survival mode … and that’s measurable. The federal government has 80-plus years of research and hundreds of millions of dollars invested in the polygraph technique. The U.S. Department of Defense National Center for Credibility Assessment trains all federal polygraphists, FBI, CIA, military and more. They have tested at least 27 different types of nervous system responses (things like pupil dilation and constriction, blood vessel dilation, brain “T-waves” and more). But still, the three basic parameters mentioned above remain the gold standard. Most polygraph systems also measure intentional countermeasure efforts that examinees might use to try to defeat the test. In this field of forensic psycho-physiology, there is also a newer technology, “EyeDetect,” that could be useful as a pre-polygraph screening tool for a large field of potential suspects.

In the hands of a highly qualified, trained professional, polygraphy is very reliable and works great. In all my years of testing, I was only found to be wrong once, and that was when I made a foolish mistake. Besides the reliability in discovering if you do or don’t have the right guy, polygraphy’s greatest value is its ability to generate confessions. I think that every interview and interrogation school out there took their source material from the psychological persuasion techniques developed in the polygraph profession. Throughout the law enforcement, investigative, military, security and espionage professions, polygraphists are widely considered the best interviewers and interrogators in the world.

About two-thirds of my criminal polygraph tests revealed intentional deception (in polygraph terms, DI or deception indicated). For these, my confession rate was over 80%. If your polygraphist is doing a good job, you should be getting similar numbers. In my opinion, anything less than a 65% confession rate for DI charts means that you should probably start shopping for a new polygraphist. If you have an in-house interrogation specialist who you prefer, he or she can effectively work with your polygraphist by watching the test remotely, and then taking over if the polygraphist discovers deception.

Since confessions equal convictions, so long as your detective bureau is delivering quality suspects over to your polygraphist, that’s a ton of child molesters and other crooks punching their own first-class tickets to prison. And for pre-employment polygraphy, who knows how many community crises you’re averting by keeping badges off undeserving applicants. If you don’t run your applicants through a polygraph test, take some time to learn how many of your LEOs intentionally avoided applying for agencies that use polygraphy. Applicants know which outfits do and don’t, and the ones who have something big to hide … those guys and gals are definitely in your applicant pool.

Polygraph charts are scored mathematically. Depending on the type of test, once the charts hit a certain positive number for truthfulness or a certain negative number for deception, a DI or NDI call can be made. Inconclusive results land in the numerical ranges between those two minimum numbers. Computerized polygraphy can score charts automatically, but the APA still holds that hand-scoring by the polygraphist is the best means, and you should definitely require that.

Most polygraphists specialize in either criminal tests or pre-employment tests, so that’s what they become good at (meaning that they probably won’t be as good at the other). If you have a major criminal case that you’re working on, don’t make the mistake of assigning your mostly pre-employment polygraphist to it. He or she will be more used to dealing with comparatively honest employment applicants who have to cooperate with the testing procedure. Crooks who are being interviewed or interrogated are oftentimes not only deviously dishonest, but they can also walk away at any time, so they have to be handled differently. In advance of your community’s sensational crime where confession evidence is crucial, know who is the best criminal polygraphist in your region, get him or her in contract and keep them on standby. Minimally, he or she should at least be able to reliably tell you if you have the right suspect or not, but if your suspect is lying, there’s a better chance than not that you’ll get a confession.

You should require your polygraphist to keep track of their performance statistics and provide them to you monthly. These stats should include how many tests they ran, the kind of tests, the results (DI, NDI or inconclusive), the total time taken for each examination and whether or not they obtained any pre-test admissions or post-test confessions. Particularly in pre-employment examinations, polygraphists ordinarily get a lot of pre-test admissions, but it’s their confession rate on DI charts that will tell you how good they are or not.

You should require your polygraphist to video record their tests. Let them know that staff will randomly watch at least one test per month to gauge their professionalism. Also, monthly, one random set of polygraph charts should be sent out to a reputable polygraph institution in a different region for quality control review. All inconclusive tests should be sent there for a second opinion, too. These steps will assure the polygraphist’s best efforts.

When polygraphists make a DI call, they should always interrogate. Yet, because of the added time it takes, some contract pre-employment polygraphists only barely do. Some pre-employment examinees are only withholding ambivalent, inconsequential things that are only a big deal to them. By giving them an extra chance to purge that guilt, it’s still possible for them to run a clean set of charts before they leave. Then, the hiring authority can judge the level of intentional deception against the quality of the candidate.

Some law enforcement agencies have a policy of discharging applicants who fail polygraph tests. Absent any disqualifying admissions or confessions, that is not only unfair and wrong, but it’s probably also outside of employment law. If you have an already marginal applicant who fails, it’s usually easy to find something else to justifiably discontinue them. But sometimes, otherwise good applicants who fail are adamant that they are not lying, and on the face of things, they’re quite believable. That may be for good reason. In these instances, your polygraphist should run a more valid specific issue (“criminal”) test that focuses on the singular issue that the applicant failed. Ideally, this should take place at a later date. If he or she flunks again, in order to justify disqualification (if that’s what you prefer), your background investigator will have to find solid evidence outside of the polygraph test.

My final piece of advice is that you require your polygraphist to attend at least one polygraph training seminar per year, something like a national or statewide yearly training convention. There are enough changes in science, technology, laws and even philosophies in the profession that regular training is a must.

In my opinion, polygraphy can turn a wilderness of mirrors into a clear pathway toward solutions. If you’d like to know more about it, contact the American Polygraph Association or the National Center for Credibility Assessment. You can also feel free to call or email me. 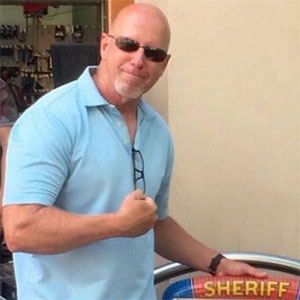