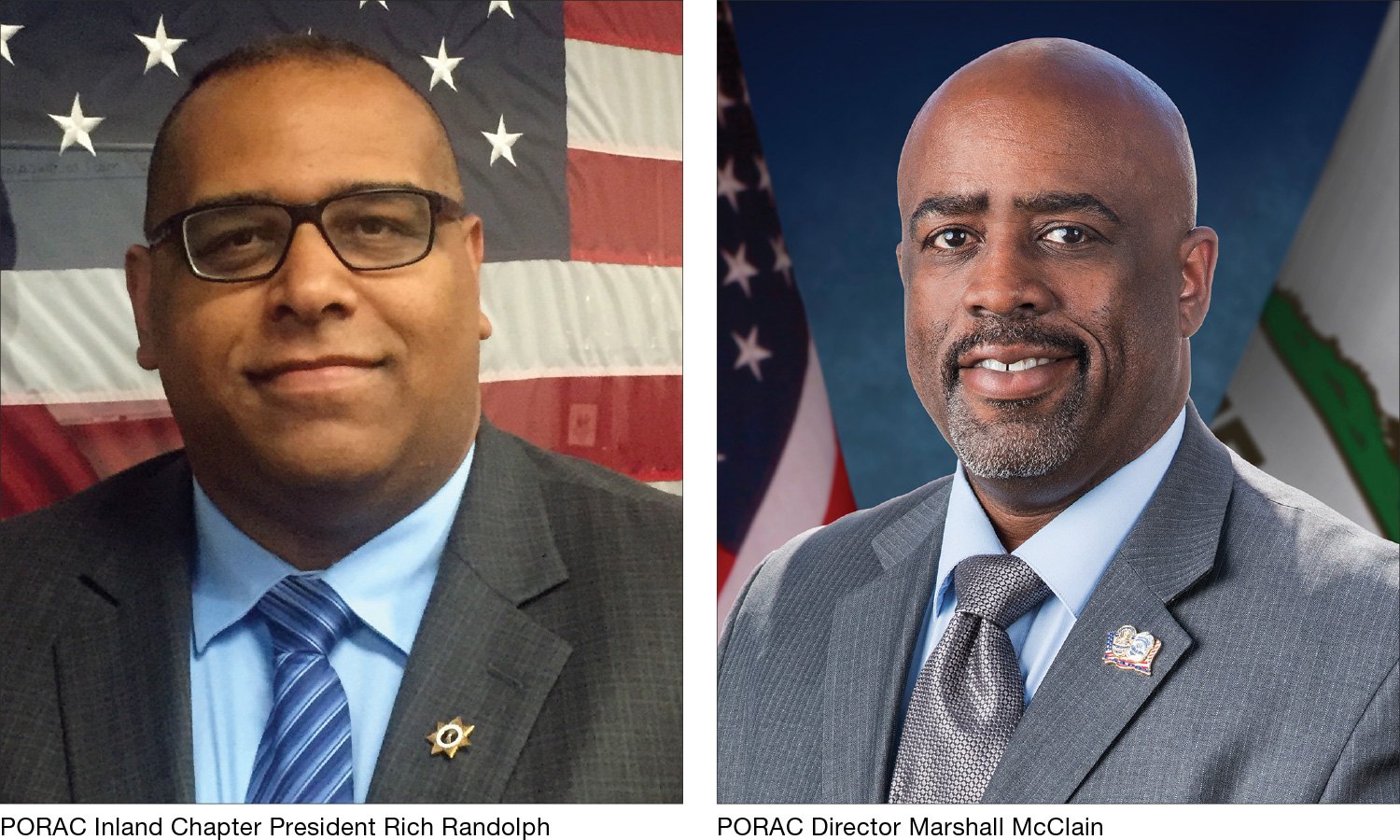 The fatal killings of George Floyd, Breonna Taylor and other Black citizens at the hands of law enforcement has ignited a reckoning over police violence in America. Their widely publicized deaths have prompted mass protests as well as a renewed push from lawmakers and social justice advocates for nationwide police reform addressing use of force, brutality and systemic racism.

Police leaders and pro-law-enforcement politicians have weighed in heavily on reform debates, acknowledging the need for change while calling for commonsense solutions to address issues within the profession, such as developing a national use-of-force standard, building transparency through accurate use-of-force data reporting, allocating more funding, not less, for training and hiring resources, and holding officers who engage in misconduct accountable.

The Peace Officers Research Association of California (PORAC) aims to address those issues and much more with United for Positive Reform (UPR), an ambitious new community-based law enforcement coalition being organized by PORAC Executive Committee Director Marshall McClain and PORAC Inland Chapter President Rich Randolph with the help of a cultural caucus including law enforcement members from the Black, Hispanic, Asian-American, Jewish and LGBTQ+ communities.

The diverse makeup of the coalition is indicative of PORAC’s desire to take a collaborative approach to police reform and represent a more accurate and accessible image of law enforcement. The group plans on bringing officers together with various sectors of the community — faith leaders, schools, businesses, social justice groups and more — to find common ground and enact positive and sustainable change. By doing so, the coalition hopes to create a more transparent and inclusive vision of law enforcement, one that not only brings about meaningful reform, but also encourages a rethinking of the profession and what it means to be a police officer.

“We want to propose sensible reform, something that both sides can get their arms around,” says McClain, who also serves as the president of the Los Angeles Airport Peace Officers Association. “We want to create long-lasting change and an ongoing partnership with the communities we serve based on transparency, dialogue and respect.”

Part of the coalition’s purpose will be to mobilize existing support for law enforcement. “A lot of officers feel like no one’s spoken up for them, that everyone’s turning their backs on them,” adds Randolph, who is also the secretary and former president of the Colton Police Officers Association. “But we believe that most Americans still see an overall need for law and order and are seeking a way to get involved in making change that isn’t tied to extreme political views. We want to reach out to this silent majority, and we’re hoping that people will recognize our efforts and stand by us. Cops across the country are being persecuted for the actions of very few.”

But since the coalition’s mission also involves reaching out to those who may hold less favorable views of law enforcement, another crucial component is education. The group plans to present new research, data and analysis to better inform law enforcement policy and laws, such as updated use-of-force statistics, studies on the impact of police–community relationships, outcomes of existing reform policies and much more. Providing educational resources, they argue, will help create more fact-based discussions about force use and policing in general, provide an alternative, objective source of information and, most importantly, dispel long-held myths about the law enforcement profession. “The goal is to become a resource that’s second to none,” McClain says.

In addition to being a “think tank” of sorts, UPR intends to educate the public about all the law enforcement reform efforts that have been adopted over the last decade, starting with California, which already has enacted many of the policies that social justice advocates have recently been calling for.

“I don’t think the law enforcement community has done a good job of reporting what reform we’ve already accomplished,” McClain says. “No one’s really talking about SB 1421 [a California law passed in 2018 that grants the public the right to see police records relating to misconduct and serious uses of force], a big transparency and accountability law, but it happened.

“Or AB 392 and SB 230, two bills passed into law dealing with peace officers’ use of deadly force in 2019,” he continues. “California legislators were instrumental in creating and passing this comprehensive legislative police reform package — which has made the most significant changes to California’s use-of-force policies in more than a century — mandating that every California law enforcement officer receives the most robust training in the nation designed strictly to minimize the use of force. These bills were crafted with input from PORAC along with the American Civil Liberties Union. We aim to make the public aware of what we’ve done to reform policing.”

Another point UPR wants to make the public aware of is the role of police unions, which McClain says have been at the forefront of many police reforms (he cites PORAC’s repeated calls for a nationwide use-of-force standard). He also wants to educate people on what police unions actually do, as there have been a lot of misconceptions floating around over their purpose.

“We don’t defend bad cops, and we make sure our members follow the rules,” he says. “Like every other labor union, we protect our membership and ensure that they receive the same due process rights as everyone else.”

“We donate a lot of money every year to community organizations and causes. People don’t think about it, the bridges unions build. Unions don’t just advocate for pay and benefits; we donate money throughout the year to support scholarships, fundraisers and more,” he says.

Educating the public will also empower them to do their own research so that they can better understand the context of the policing and the criminal justice system and formulate informed opinions about reform, Randolph says. “We want to shift people’s perspectives; we want to show people the reality of what the job is and what we do.”

UPR hopes that by educating people about all aspects of law enforcement, it will ultimately alter the public’s perception of policing.

“If you dehumanize police officers, it’s easier to attack them,” McClain says. “We want to humanize them — we’re teachers, counselors, guardians. We aren’t violent warriors; we are peacekeepers. We are here to protect and serve.”

McClain and Randolph believe that a skewed perception of policing may exist because a department’s effectiveness is typically gauged by performance-driven data, such as crime statistics, and therefore not enough attention is paid to community policing efforts, which have long been said to be key to reform. UPR will make it a priority to highlight these efforts and encourage departments that haven’t already done so to engage and connect with their communities, especially youths, which Randolph believes will be paramount to rebuilding policing’s image.

“To reinvent the image of officers, we must start with younger kids, the younger generation. We need to be offering more programs involving youths and law enforcement, such as Explorers and ride-alongs,” he says, adding that school resource officers provide the perfect models for community policing because of the collaborative role they play with students, educators, parents and the community at large.

Along with education, UPR is looking to closely partner with communities themselves to achieve proactive solutions for effective reform. “We want to be the group that addresses issues, identifies screwups and moves forward together,” Randolph says. “The goal is to unite, unite, unite.”

However, he and McClain recognize that with so much divisiveness over various aspects of policing, not all who take part in the coalition will be 100% on board with everything the majority of the group may decide in regard to reform. They expect that and actually welcome it.

“We’re not trying to create a groupthink type of atmosphere. We want to be considerate of all views,” McClain says, adding that this inclusive approach will help the group engage and mobilize supporters of public safety who want reform but who don’t feel represented by existing activist groups.

The road to achieving reform will likely be a long and winding one, with many controversial issues to consider and roadblocks to overcome, but UPR is up for the challenge and is ready to build a strong partnership between community and police to bolster law enforcement’s mission to protect and serve.

“I truly believe folks are looking for a better way to move forward,” McClain declares. “We have some loud voices calling for extreme measures like defunding and even abolishing the police, but most people aren’t comfortable with the idea of tearing everything down. We want to present another option for reform that isn’t destructive, but instead can result in actual, sustainable change. For that to happen, law enforcement needs to have a seat at the table, and we need to reach out and connect with everyone who has a stake in public safety. And to do that, we need to make sure they understand what we’re really about.”

While based in California and still in its beginning stages, UPR is planning to ramp up enough support to eventually become a nationwide initiative. If you’re interested in being part of the group, visit united4positivereform.org.

As seen in the July 2020 issue of American Police Beat magazine.
Don’t miss out on another issue today! Click below: