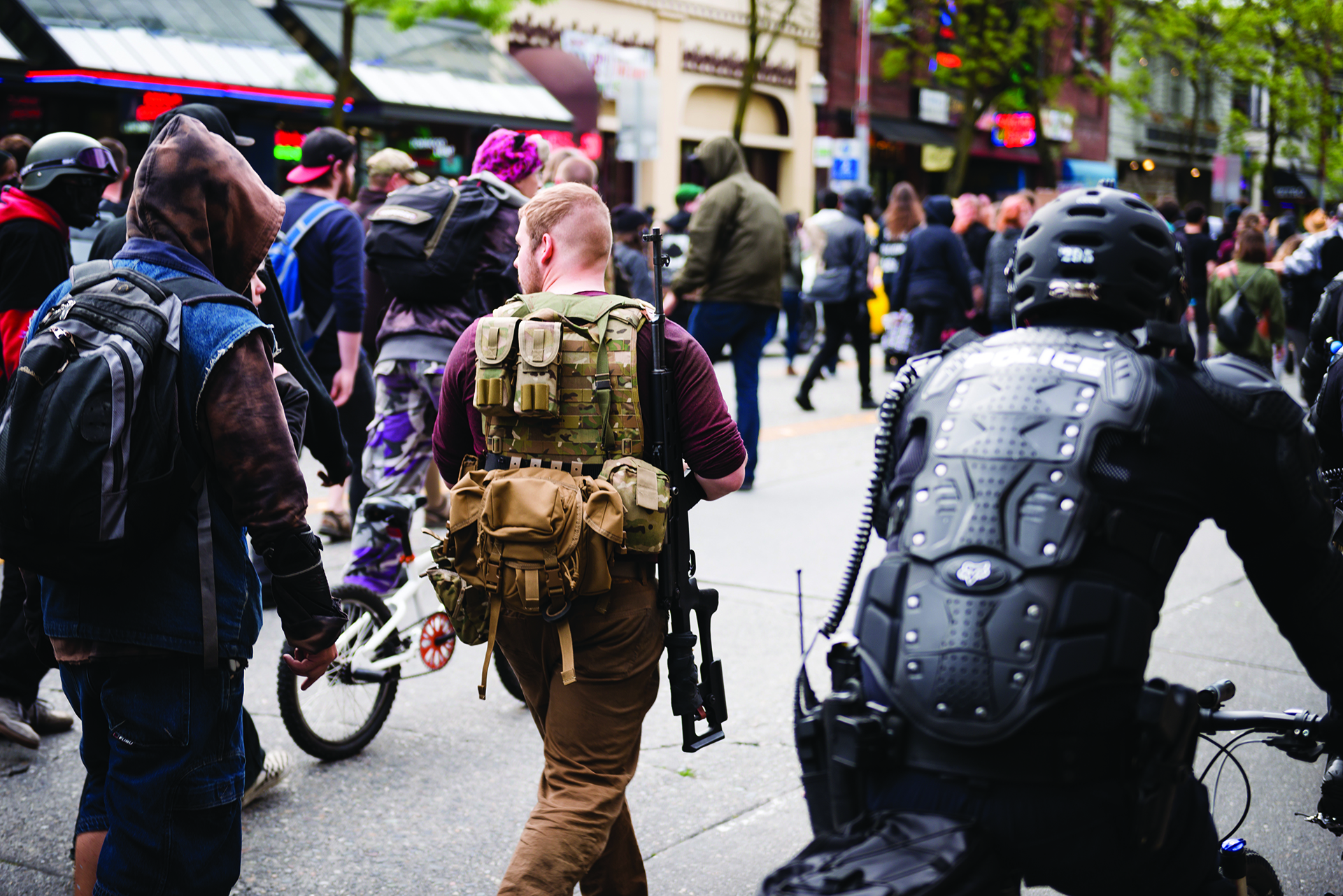 For the past several months, tension has been running high between law enforcement and the citizens they’re sworn to protect. Massive demonstrations and protests have been held throughout the country, some of which have devolved into violence. The situation has led to the growing prominence of vigilante groups, and cops and watchdog groups alike are worried.

Local militias and other groups formed under the pretense of protecting their communities have risen to prominence throughout the country. Their members often openly brandish high-powered weaponry to intimidate others and try to keep the peace. Law enforcement officers have grown concerned that such behavior could incite more violence, and legal experts have warned militia members that their weapons and lack of police training could put them on shaky constitutional ground.

“Law enforcement officers go through months of training in the use of force, de-escalation of force, defensive tactics, and the use of a firearm to defend themselves and the citizens they are sworn to protect,” Thomas O’Connor, a retired FBI special agent who spent much of his career investigating domestic terrorism, told CNN. “A civilian with a firearm on the street during a volatile situation may have the legal right to have that weapon, but that does not always mean it is the wise decision.”

Armed citizens at protests have occasionally been welcomed by law enforcement. At early protests in Kenosha, Wisconsin — where Jacob Blake was shot — police gave water to apparent militia members and thanked them. However, the situation in Kenosha turned violent, and 17-year-old Kyle Rittenhouse allegedly shot three people, killing two and severely injuring the third. Rittenhouse has since been arrested and faces multiple counts of homicide.

Kenosha is also home to a group known as the Kenosha Guard, which was formed in June by Kevin Mathewson. It received very little attention upon its inception, but after the shooting of Blake and the subsequent protests, membership ballooned. Kenosha County Sheriff David Beth said such armed groups raise tensions in what is already a strained situation.

“Part of the problem with this group is they create confrontation,” Beth said at a news conference after Rittenhouse’s arrest. “If I put out my wife with an AR-15 or my brother with a shotgun or whatever it would be walking through the streets, you guys would wonder what the heck is going on. That doesn’t help us.”

Many of these established militias have existed for years. However, the movement has become stronger in recent months. Researchers told CNN that since April, there have been organic outgrowths of the movement, first at rallies that protested shutdowns due to the coronavirus, then at the sites of racial justice demonstrations. These researchers said patrols by these militias designed to deter criminal behavior have instead led to varying degrees of confrontation.

A survey conducted by two think tanks — Political Research Associates and the Institute for Research and Education on Human Rights — documented 187 appearances of paramilitary and other far-right actors at rallies across America from late May to early July. Confrontations between protesters and armed citizens made headlines in Salt Lake City, Minneapolis and Albuquerque.

“It’s the logical end of a years’ long path that we’ve been on of normalizing the idea that vigilante justice is not just justifiable but is necessary,” Howard Graves, a senior research analyst at the Southern Poverty Law Center, which studies hate groups, told CNN. “It’s not an accident that this resulted in death — that is what’s going to happen based on what these groups envision themselves doing.”

Tensions tend to start with philosophical or political differences. However, those tensions are often escalated by disinformation that citizens read online about organized looting campaigns or the dangers of Antifa, which are presented without evidence.

“There’s this disconnect between what is real on the ground and what people are reading on the internet, where everyone is sharing messages about George Soros paying for buses to go out into the towns and all these types of things that are totally not true,” Alex Friedfeld, an investigative researcher at the Anti-Defamation League’s Center on Extremism who monitors the groups’ activity online, told CNN.

The Second Amendment has also become a sticking point for some citizens. And while it is legal to openly carry a long gun in public in 44 states, that generally does not give citizens the right to use deadly force, even if it is to protect someone else’s business.

The legality of these militias to band together and advocate for the use of force is also questionable, according to Mary McCord, a former senior Justice Department official who is now the legal director of the Institute for Constitutional Advocacy and Protection at the Georgetown University Law Center.

And while it is true that language regarding a “well-regulated militia” is part of the Second Amendment, that doesn’t give citizens the right to join together to form their own private vigilante groups. The Supreme Court has long held that the right to bear arms belongs to each individual person, which does not prevent states from enacting their own laws to ban the creation of citizen militias.

She wants to help citizens whose hearts are in the right place to actually do good work and help protect their communities, while limiting the potential of escalating tensions turning into violence. She offered to consult with the people of Kenosha about “how to protect public safety while preserving constitutional rights during public protests and demonstrations.”

In short, organized militias often do not lead to a reduction in violence. In fact, they often lead to the opposite outcome, which further damages the community they are trying to protect. Dealing with tense and potentially dangerous situations is best left to trained law enforcement officers.