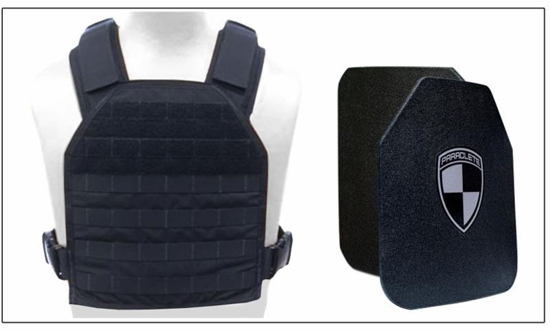 Point Blank is the main distributor for one of the leading armor plate manufacturers in the law enforcement market—Buffalo Armory. The company manufactures the revolutionary NIJ III+ Star Armor ® 555 armor plate, which provides a new standard for ballistic performance by absorbing multi-hits from high velocity rifle weapons; offers freedom of action with its ultra-thin design, and provides greater value at a fraction of the price for alternative ceramic plates.

Each kit, which includes a vest with front and back body armor plates, weighs less than 18 pounds and protects a first responder’s vital organs when confronted with an active shooter with a high velocity rifle.

When confronted with an active shooter, the officer simply dons the Active Shooter Response Kit over whatever he or she is wearing to take immediate action.

“The old days where a first responder would contain an active shooter until the tactical unit arrived are over.” One of the most recent orders came from the Miami Police Department.

“We feel it’s important for officers to have the Active Shooter Response Kit as another tool to respond to incidents with active shooters,” Major Lazaro Ferro said. “It’s not just for the officer. It’s so that we can take immediate action to get in there and rescue innocent lives that we must save,” Ferro said.

Brent Nicholson, General Manager at Buffalo Armory, added, “Our armor produces a better and less expensive solution to protect first responders from an active shooter with a high velocity rifle. Sadly, the rifle is becoming the weapon of choice for today’s criminal and terrorist. No longer can first responders simply contain an active shooter until a tactical unit arrives. Action must be taken immediately and police, fire fighters, and EMTs require our protection.”