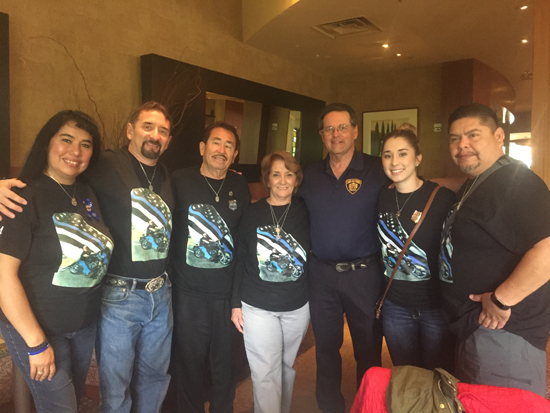 It comes down to one word: Brotherhood
by Susan Yerkes

It’s not strange that David Putnam spends a good part of most days thinking about death in the line of duty.

Putnam, who retired from the San Antonio Police Department years ago, is no longer in the daily line of fire. But over the last couple of decades, his feeling for fellow first-responders led him to a passionate pursuit that has added meaning to his second career. David and his wife, Charlotte, pictured at the right, have built Alamo City Gold & Silver Exchange in San Antonio, Texas, together.

Putnam has earned an international reputation for his creations, which include replicas of law-enforcement badges encased in rings, bracelets and lapel pins. Most popular are the pendants for wives and mothers.

Over the years, when Putnam heard of the deaths of first-responders, he honored their memory by creating and presenting pendants to their families.

He said the idea blossomed after a former San Antonio P.D. colleague died in the line of duty in the late 1980s. He created a sterling silver pendant, an exact replica of the fallen officer’s badge, and presented it as a rembrance for the grieving family.

“As a police officer, I had friends killed in the line of duty,” David said. “When that happens, the department retires the officer’s badge number, and they give you a flag and maybe a plaque that  you put on the wall or in a drawer. I thought that I could make pendants copying their badges, so people could wear them close to their hearts every day – to show the world their pride.”

Putnam served with San Antonio P.D. for 20 years. He was on the team that took down the infamous Fiesta sniper in 1979 during the Battle of Flowers Parade. A newspaper clipping on his office wall shows a photo of him tossing a smoke grenade from the roof of an adjacent building into the sniper’s camper.

“He fired a whole clip up at me,” he remembered.

Putnam later served in the vice unit and eventually became an investigator. Before retiring from the force, he worked a second job as a security officer for a jewelry business. After making money in gold, he and wife Charlotte opened their business.

During those first few years, Putnam created pendants commemorating fallen first-responders locally and around Texas. After the terrorist attacks of Sept. 11, 2001, he began to do the same for those nationwide. He created “End of Watch” pendants for law enforcement officers and “Last Bell” pendants for firefighters.
In 2002, Putnam traveled to New York City to present 73 pendants for families of the fallen during a memorial ceremony that included former New York Mayor Rudy Giuliani – one of the only times he participated in such a public presentation.

Putnam said he prefers sending pendants to police chiefs or sheriffs of departments that employed the deceased officers, enclosing letters requesting they be forwarded to loved ones. He said the only way he knows that pendants were received is if a spouse, significant other or the officer’s children contact him.

Many have. He has three fat binders full of thanks.

Another widow said, “I have worn it every day since it arrived, with such pride!”

There are hundreds more.

Each morning, Putnam checks an online database that tracks first-responder deaths. When a new listing appears, he creates an exact replica of the badge, complete with name and badge number. Aided by some $75,000 worth of special machinery and computer programs, his database includes hundreds of different badges. Putnam said it takes about 12 hours to create each pendant, and estimates he’s completed more than 2,000 of them over the years. In May, he was working on pendants for families of two Hattiesburg, Mississippi police officers gunned down during a traffic stop.

“I think once he started doing it, he just couldn’t stop,” his wife Charlotte noted. “David was so grateful that he was able to retire and had never been injured or worse. He always says it’s something he can do for the brave men and women who are still out there. Not only do they make a sacrifice, their families make a sacrifice too.”

Charlotte wrote a poem which is engraved on each memorial pendant:

“Duty to uphold the law
And respect for it too,
Courage to defend what is right
Pride in all they do.
Done without glory
Done without fame
Done without hesitation
In justice’s name.
Wear this pendant with pride
In your loved one’s memory
To honor the courage shown
In danger and adversity.”

The Putnams are huge University of Notre Dame fans, and are officially licensed to create and sell Notre Dame jewelry. Charlotte’s office is stuffed with Fighting Irish memorabilia.

Charlotte notes that, “Notre Dame’s saying is, ‘What are you fighting for?’ such as fighting to find a cure for cancer or fighting to end poverty and world hunger. They also ask, ‘How do you give back to the community?’ This is how David and I give back to those fighting to make our world a safer place to live.”

“It comes down to one word,” David added, his eyes misting – ‘Brotherhood.’”

Susan Yerkes is a reporter with the Local Community News in San Antonio.