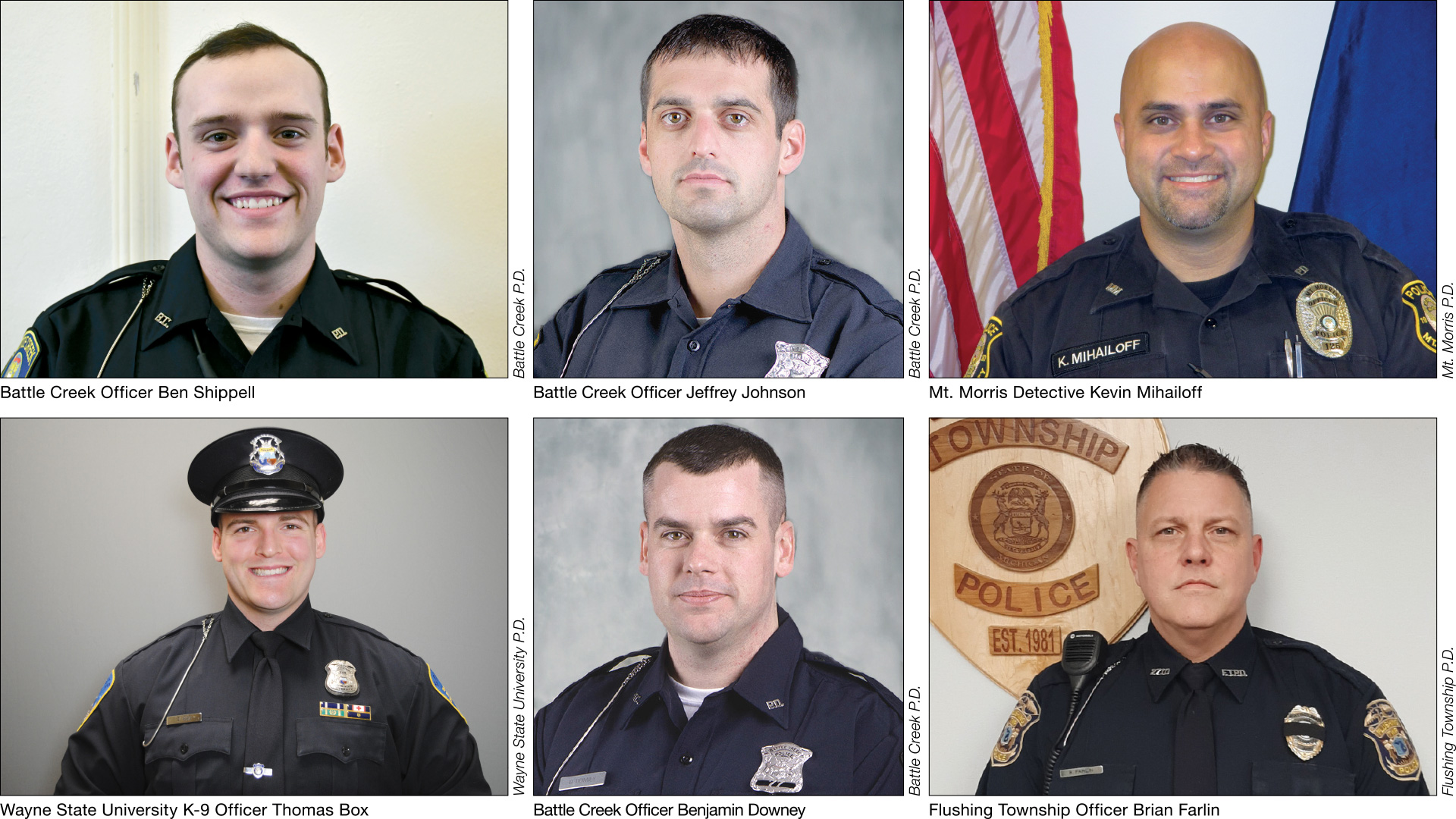 Three of the OSA recipients — Battle Creek Officers Jeffrey Johnson, Benjamin Downey and Ben Shippell — were rewarded as a group for their actions after an arrest went wrong. The officers arrived at a home to issue an arrest for outstanding warrants. After making contact with the suspect who had outstanding warrants, the suspect fled, Officer Johnson pursued, and a fight ensued.

The suspect shot Johnson once in the leg, knocking the officer to the ground. At that point, the suspect stood over him and shot him again in the wrist and chest. Johnson’s vest stopped the bullet to the chest and he returned fire as the suspect fled again.

Officers Downey and Shippell found the seriously wounded Johnson on the ground. Shippell applied a tourniquet to the wound in Johnson’s leg, while Downey kept him engaged and alert. The wound was serious enough that Downey elected not to wait for an ambulance and instead drove him to the hospital himself.

As Johnson received life-saving care, officers from several departments worked together to track down the suspect who had shot him. They found him later that day, and he was arraigned on charges of assault with intent to murder, resisting police causing serious impairment and use of a firearm in commission of a felony.

Johnson, Downey and Shippell were the only officers to be awarded OSAs as a group. The other three were each recognized for their individual life-saving efforts.

Officer Brian Farlin of Flushing Township received his for rescuing a 17-year-old girl who was trapped inside a burning home. Farlin worked with the Flushing fire chief to reach the first-floor roof of the home, where they broke a window through which Farlin was able to successfully pull out the victim. Farlin draped curtains over the window’s broken glass to prevent injury to the victim, but he suffered lacerations and abrasions on his hands and arms in the process.

The fire started because something was left on the stove, and smoke filled the home while the victim gave her dog a bath. Both the girl and the dog were successfully rescued, and the girl was treated and released from the hospital for smoke inhalation.

One of the other recipients of the OSA was Mt. Morris Detective Kevin Mihailoff, who dove into frigid water to rescue a 50-year-old man who was trapped in a vehicle underwater. The vehicle had driven through a guardrail, plunged 20 feet and landed upside down in the water below.

The water was biting cold and murky, making it difficult to locate the driver of the vehicle. Mihailoff dove into the water, entered through the vehicle’s broken rear window, and was able to grab hold of the driver and pull him to safety.

Mihailoff received treatment for exposure on the scene, while the driver was taken by ambulance to the hospital, where he was treated and released.

The final OSA recipient was Thomas Box, a K-9 officer with Wayne State University in Detroit, who stopped a gunman who was shooting at three men after shooting at a fourth victim earlier that evening.

Officer Box responded to the first report of shots being fired, where he learned the suspect had fled on a bicycle. Box stayed on site to gather evidence and speak to the victim. During that conversation, the victim saw the gunman on his bike nearby.

Box called for backup before seeing the gunman pull out a handgun, point it at three men and fire several shots. Box confronted the gunman, drawing his attention while the victims ran for cover. He ordered the suspect to drop his weapon, but he instead pointed his weapon at Box, who shot the suspect.

The wounded suspect fled again on his bike but collapsed shortly after. He ultimately died of his wound, but none of the four victims who had been shot at were hurt.

An investigation by the Wayne County Prosecutor’s Office cleared Officer Box of any wrongdoing in the death of the suspect, and he was awarded the WSU Police Department’s Medal of Valor and the WSU Police Officer of the Year. He was also awarded the Michigan Association of Chiefs of Police Medal of Honor, making the OSA the fourth time he’s been honored for his bravery that day.

“You focused the shooter’s attention on you as you yelled for the suspect to stop,” WSU Police Chief Anthony Holt said during the Medal of Valor presentation. “The suspect pointed his weapon at you, and you stopped the threat. Officer Box, you saved several lives that night, including your own.”

American Police Beat congratulates the six officers who were recognized with OSAs for putting themselves on the line to save the lives of others.

“The POLC is extremely proud to represent these brave officers,” POLC Director Rob Figurski said. “Their quick response to potentially deadly situations is a testament to their extraordinary courage and commitment to protecting and serving.”

As seen in the November 2020 issue of American Police Beat magazine.
Don’t miss out on another issue today! Click below: