When it comes to police leadership and the challenges that go with it in what clearly is a changing world of law enforcement, there is something we need to ask: Where is leadership? Where is our police executive leadership?

You will hear many fancy terms repeated in nearly every leadership school or education process you attend, like “Effective police leaders become adept to responding to challenges.” But what does that really mean?

In this article, I am going to cover what I believe are basic leadership techniques we need to address — not only as a profession, but as a nation.

Almost every police executive, whether they are a police chief, superintendent, sheriff or some other executive title, has been to police leadership school, such as the FBI National Academy in Quantico, Virginia; Northwestern University School of Staff and Command in Evanston, Illinois; Southern Police Institute Executive Program; Police Executive Research Forum (PERF) Executive Training and numerous others. These types of education are part of “punching your ticket,” and most municipalities, cities and recruiting firms will require you to have one of these police executive schools listed in your resume. While somewhat worthwhile, much of it is what you must have in order to be considered for a top position.

Over the past several years, specifically the last two, I have seen a noticeable and disappointing trend in police leadership. There are many police chiefs, other executives and even police executives who hold statewide or national positions, such as president of a national police organization, who are doing nothing more than simply feathering their nest for their next opportunity. They are selling out our profession so that they may enrich themselves in what they consider to be cushy or pristine positions.

In other words, they are setting themselves up for retirement or a better position at the cost of those who, for as long as I can remember, are considered the backbone of law enforcement: the patrol force, detectives and officers who work the street. There is not a single police executive who does not know that their success in a police chief position solely depends on how well the officers in their agencies follow their direction, how well they are trained and how they support their administrative initiatives.

An example of some verbiage I have heard over the last five years would be something like: “While we had to make a modification or agree with a proposed piece of legislation that was anti-police, it was so we could be in a position for future law enforcement legislation that may be coming down the pipe, and we could still be at the table.”

What does that mean? Well, it means we are always giving up our priorities, our ethical stand, what we know to be true, for the next best thing.

There continue to be police executives who are constantly positioning themselves for the next best position at the expense of their department, their state and, in reality, our profession as a whole.

This article is based on what we all know. You will not see a lot of footnotes or many references to certain academic issues. This is what every police executive knows, and they all know I am speaking the truth.

We are at a crossroads in law enforcement in America. Despite what you might hear, there are plenty of those out there who still despise us. Some of those individuals are in very important and powerful elected positions. They speak out of both sides of their mouth. As police leaders, let us not follow their lead.

It is time to choose. Are you advocating for our profession? Are you truly leading in your position as a police leader? Are you standing up for what is right — and what you know to be accurate, despite what you see in media reports and “defund the police” issues?

Here is an example of a media headline-catching term that is taking over on a national level: police violence. Time and time again, I hear that term used in the media and have even heard some national police leaders use it during news conferences and press releases.

Please know that there is not a single police officer who comes to work each and every day wanting to harm someone. It is simply not true. To use the words “police violence” indicates that police officers are using criminal violence against people. There is no factual basis behind this. It is ridiculous.

As police leaders, we need to stop using this term immediately. There is no such thing as police violence.

In closing, I am asking our national leaders, state leaders and police executives throughout the country to simply do what is right.

Do not self-serve to save your current pristine position or feather your nest for future positions. Just lead. 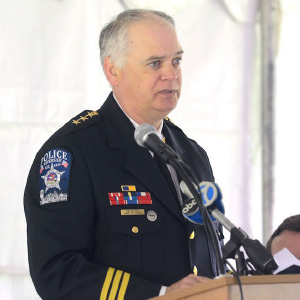 Tom Weitzel retired from the Riverside, Illinois, Police Department in May 2020 after 37 years in law enforcement, 13 years as chief of police. All views expressed in this article are his own and do not represent the opinions of any entity whatsoever with which he has been, is now or will be affiliated. Chief Weitzel can be reached at tqweitzel@outlook.com, or follow him on Twitter @chiefweitzel.